Ground Penetrating Radar, also known as GPR, Georadar, Subsurface Interface Radar, Geoprobing Radar, is a totally non-destructive technique to produce a cross section profile of subsurface without any drilling, trenching or ground disturbances. Ground penetrating radar (GPR) profiles areused for evaluating the location and depth of buried objects and to investigate the presence and continuity of natural subsurface conditions and features.

The GPR operates by transmitting electromagnetic impulses into the ground through transmitter antenna. The transmitted energy is reflected from various buried objects or distinct contacts between different earth materials, across which there is a contrast in dielectric constant. The antenna then receives the reflected waves and displays them in real time on screen. Data is also saved in appropriate memory for later processing and interpretation.

The depth of penetrating in also determined by the GPR antenna used. Antennas with low frequency obtain reflections from deeper depths but have low resolution. These low frequency antennas are used for investigating the geology of a site, such as for locating sinkholes or fractures, and to locate large, deep buried objects. 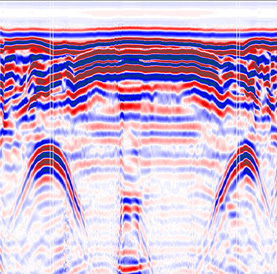 Antennas with higher frequencies (300 to 2000 MHz) obtain reflections from shallow depths (0 to 10 meters) and have a high resolution. These high frequency antennas are used to investigate surface soils and to locate small or large shallow buried objects, pipes, cables and rebar in concrete.

GPR can detect objects of any material, metallic or non-metallic.