The primary purpose of obtaining crosshole data is to obtain the most detailed in situ seismic wave velocity profile for site-specific investigations and material Characterization. Crosshole velocity data are valuable for assessing man-made materials, soil deposits, or rock formations.

The seismic technique determines the compressional (P-) and/or shear (S-) wave velocity of materials at depths of engineering and environmental concern where the data can be used in problems related to soil mechanics, rock mechanics, foundation studies, and earthquake engineering. Crosshole geophysical testing is generally conducted in the near surface (upper hundred meters) for site-specific engineering applications (Sirles and Viksne, 1990). All of the dynamic elastic moduli of a material can be determined from knowledge of the in situ density, P-, and S-wave velocity. Therefore, since procedures to determine material densities are standardized, acquiring detailed seismic data yields the required information to analytically assess a site. Low-strain material damping and inelastic attenuation values can also be obtained from crosshole surveys. However, the most robust application of crosshole testing is the ability to define in situ shear-wave velocity profiles for engineering investigations associated with earthquake engineering (Mooney, 1984).

The objective of acquiring crosshole data can be multipurpose; that is, the seismic velocity results obtained may be used for evaluation of lateral and vertical material continuity, liquefaction analyses, deformation studies, or investigations concerning amplification or attenuation of strong ground motion. Typically, crosshole surveys are geophysical tools for performing explorations during what are considered phase two field investigations (where phase one field investigations include surface geophysical surveys, follow-up drilling, trenching, and sampling of the in situ materials). During phase two field exploration, the information gathered is more critical to the analytical site-specific Characterization. Although both phase one and phase two results are important, the two independent sets of data must be integrated into the final analysis.

Crosshole techniques are most useful when phase one site explorations indicate horizontal and particularly vertical variability of material properties. When layers of alternating density or stiffness are either known to exist or are encountered during phase one field investigations, crosshole seismic tests are recommended to define the in situ velocities within each layer. Acquiring crosshole seismic data resolves hidden layer velocity anomalies that cannot be detected with conventional surface methods, allows both final interpretation of other surface geophysical data (seismic or electrical), and permits both empirical and theoretical correlation with other geotechnical material parameters.

In order to have quantitative and quality assured results, crosshole tests performed for either engineering or environmental problems should be conducted in accordance with procedures established by the American Society for Testing and Materials (ASTM). Crosshole seismic test procedures are outlined in ASTM test designation D4428 M-84 (1984). The ASTM procedures provide specific guidelines for borehole preparation, data acquisition, and data reduction/ interpretation. Based on 10 years of experience, since the inception of the ASTM standard in 1984, crosshole geophysical surveys have become more widely used and accepted for engineering as well as environmental applications. Coupling detailed site information obtained from the crosshole tests with the overall acceptance of the validity of the velocity data, these standards use both empirical correlations for liquefaction and specific input parameters for deformation or ground motion analyses (U.S. Bureau of Reclamation, 1989). 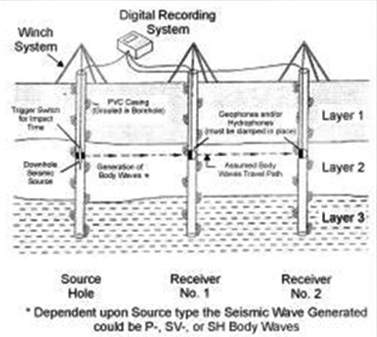