Innovative Geophysical Methods for Pipeline Leakage Detection
Dr. Sanjay Rana
sanjay@parsan.biz
Abstract:
Pipeline networks are the most economic and safest systems of transport for water, sewage, mineral oil, gases and other fluid products. As a means of long-distance transport, pipelines have to fulfill high demands of safety, reliability and efficiency. Most pipelines, regardless of what they transport, are designed with a typical life span of 25 years. When they do begin to fail, they do so slowly beginning with leaks at poor construction joints, corrosion points and small structural material cracks, and gradually progress to a catastrophic ending. But there are also other reasons for leak disasters such as accidents, terror, sabotage, or theft.
The pipeline leakage leads to waste of the material being transported, and also poses serious environmental risks. In certain cases the leaks leading to accidents can have catastrophic consequences.
The primary purpose of leak detection systems (LDS Systems) is to assist pipeline controllers in detecting and localizing leaks. LDS Systems can even provide an alarm and display other related data to the pipeline controllers in order to aid in decision-making. Pipeline leak detection systems are also beneficial because they can enhance productivity and system reliability thanks to reduced downtime and reduced inspection time. LDS Systems are therefore an important aspect of pipeline technology.
There are various modern tools available to detect leakages from pipelines, and localize such leakages. The techniques enable detection of leakages externally. i.e. without physical access to pipelines, making them suitable for use in city and urban environment as well. The paper focuses on use of innovative geophysical tools like seismographs and Ground Penetrating Radar for leak detection and localization. It is also required to detect precise location of buried pipelines before effective leak detection work can be taken up, and this solution has also been discussed in the paper.
TECHNIQUES FOR UTILITY MAPPING
Ground Penetrating Radar
Ground Penetrating Radar, also known as GPR, Georadar, Subsurface Interface Radar, Geoprobing Radar, is a totally non-destructive technique to produce a cross section profile of subsurface without any drilling, trenching or ground disturbances. Ground penetrating radar (GPR) profiles are used for evaluating the location and depth of buried objects and to investigate the presence and continuity of natural subsurface conditions and features. 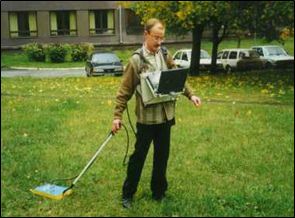 Basic Principle:
The GPR operates by transmitting electromagnetic impulses into the ground through transmitter antenna. The transmitted energy is reflected from various buried objects or distinct contacts between different earth materials, across which there is a contrast in dielectric constant. The antenna then receives the reflected waves and displays them in real time on screen. Data is also saved in appropriate memory for later processing and interpretation.
Ground penetrating radar waves can reach depths upto 60 meters in low conductivity materials such as dry sand or granite. Clays, shale and other high conductivity materials may attenuate or absorb GPR signals, greatly decreasing the depth of penetration.
The depth of penetrating in also determined by the GPR antenna used. Antennas with low frequency obtain reflections from deeper depths but have low resolution. These low frequency antennas are used for investigating the geology of a site, such as for locating sinkholes or fractures, and to locate large, deep buried objects. 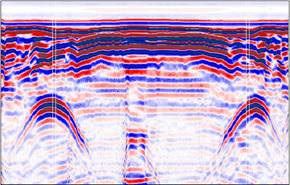 Antennas with higher frequencies (300 to 2000 MHz) obtain reflections from shallow depths (0 to 10 meters) and have a high resolution. These high frequency antennas are used to investigate surface soils and to locate small or large shallow buried objects, pipes, cables and rebar in concrete.
GPR can detect objects of any material, metallic or non-metallic.
Ground Penetrating Radar is most successful and most effective tool to map urban utilities as this is the only method which is capable of locating all type of utilities made of any material, is not affected by surface nuisances like fence, cars, buildings etc. The method also has the best accuracy for determining the depth of the utility.
Ground Penetrating Radar therefore is a method of choice for utility detection in urban environment. Typical signatures from underground pipes are shown in the picture below. The location and depth to the top of the utility can be accurately determined from the GPR survey. 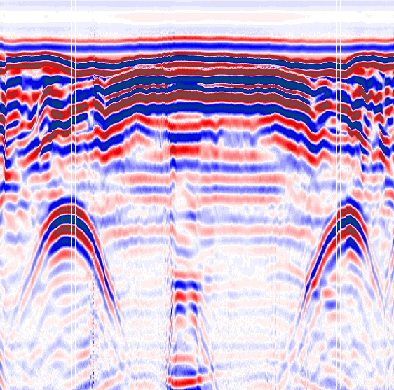 Induction Locator
Detection of Live Power Cables, Telecom cables & Metallic Pipelines:
Radio-detection uses the principles of electromagnetic to detect underground utilities. This principle works on the basis that a current flowing along a conductor creates a magnetic field, which extends around the conductor in concentric circles. A receiver coil can be used to detect the amplitude of this magnetic field. The amplitude varies depending on the position and orientation of the receiver within the field. The amplitude is maximum when the receiver is in line with the field and directly above the conductor. Moving the receiver from side to side it is possible to follow the maximum signal response and, therefore, the line of the buried service. 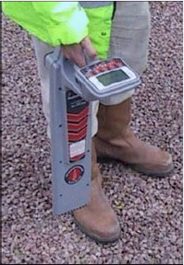 Both active and passive methods are used to ensure all possible detectable services are located.
Active Methods: An active signal is a signal that has been artificially generated by an external source. Active radio detection methods can allow different services such as BT and electric to be individually identified. Active methods involve the use of a transmitter. The transmitter can either be used for direct connection or for induction. Direct connection involves the application of an active signal to a conductor using a clamp. Induction involves a signal being radiated from the internal antenna of the transmitter, which is induced to any conductors in the vicinity and re-radiated. Generally 8, 33 or 65KHz frequencies are used. It is often possible to determine the depth of the service in this mode.
Passive Methods: A passive signal is a signal that occurs 'naturally' on a buried conductor. Passive radio detection methods will provide an indication only that services are present underground. Passive methods use the electro-magnetic fields already present around the underground utility to locate them.
Two modes are generally used:
� Power -detects 50-60Hz energy present on most buried conductors
� Radio -detects re-radiated radio energy often present on conductors -it is not possible to determine depth in this mode.
The radio-detection method, coupled with GPR, provides excellent data on underground utility network.
TECHNIQUES FOR LEAK DETECTION
Leak detection technology has advanced over the years, from simply listening using a wooden stick, to more sophisticated acoustic methods, noise correlaters, GPR and various other methods. The basic theory behind leak detection is recognized as:
Localize: Using flow logging, meter based data
Locate: Within a range using noise correlaters
Pinpoint: Using advanced techniques of geophone, GPR etc.
The time line of these developments is presented in the picture below:

The steps involved in leak detection are as under:
Localize :  The flow data is analyzed to detect zones of problem in the entire study area. Examples below illustrate the basic principle and analysis results of this approach: 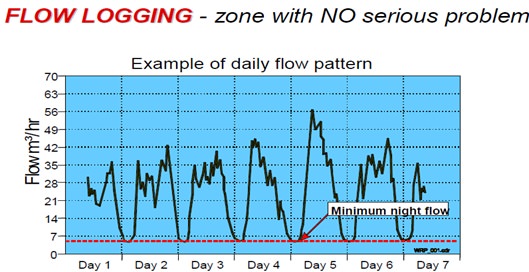 Locate: The next step is to locate the leakage. There exists various techniques for this stage, including sounding rods, LNCs etc., and appropriate method will be chosen based on initial trials. Pipe material and soil conditions greatly affect the leak noise quality to be detected:

Leak Noise Correlaters are used, in case leak noise is found to be favorable for their application

Pinpointing Difficult Leaks
There are innovative technique of leak detection using sophisticated geophysical instruments, which can be applied to locate and pinpoint leaks in most of the cases. The details of the techniques are as under:
Following precise detection of underground pipeline network, leak detection is taken up using sophisticated noise level monitoring technique. The technique involves use of extremely sensitive devices called Geophones along the route of the pipeline. The geophone or senor is connected to the monitoring and data storage facility where the data is recorded and displayed.
A geophone is a small, cheap instrument for measuring ground motion. There are many different varieties for different applications. They are designed for earthquakes, machine vibrations, oil exploration, mining, etc... Most of the models have a coil hanging from a spring in the center of some magnets. When the case is moved up and down the mass tends to stay put and induces small currents into the coil as it moves through the magnetic field. It measures velocity of motion. The current is used to move a pen over paper or gets recorded into a computer for analysis.
The Geophone water leak detector accurately locates underground leaks, both water and steam, eliminating costly and time-consuming excavation. It is extremely sensitive to vibration caused by waterleaks under hard surfaces like asphalt and concrete. Many industry plants, water departments, and municipalities are successfully using the Geophone to pinpoint underground water leaks. 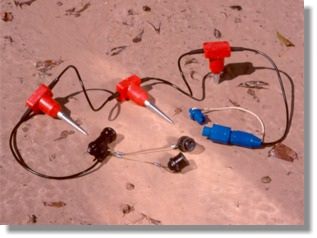 Primitive System of Noise Listening
With the advancement in technology, the modern system send the data from geophones to seismograph where data can be recorded and displayed in real time.
Use of such systems also allow a much bigger layout, using 24 channels (geophones) covering 120-240 meters of length simultaneously. The results from all the 24 geophones are displayed giving the operator a full view of the background natural noise and abnormal noise created due to leakage. 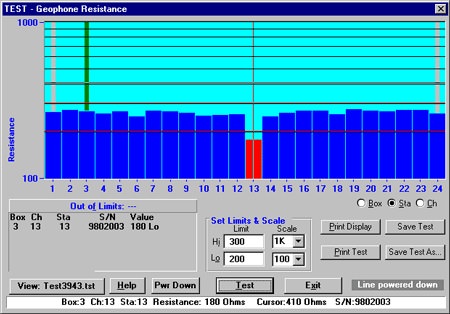 Geophone Layout along the pipeline
The modern system also has digital signal enhancement and filtering capabilities, to concentrate on the anomalies and filter out the background noise. The system also allows minimum noise profiling 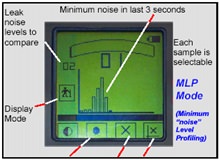 Other than the above, GPR is also used to pick difficult leaks, having little or no acoustic noise associated due to soil conditions/ pipe condition/ backfill conditions. 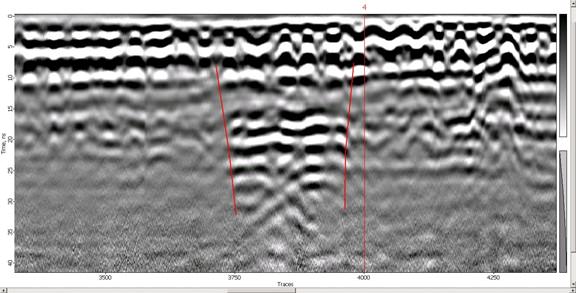 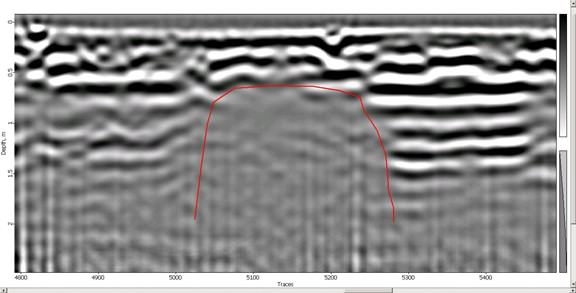 Loss of signal due to increased conductivity caused by water saturation 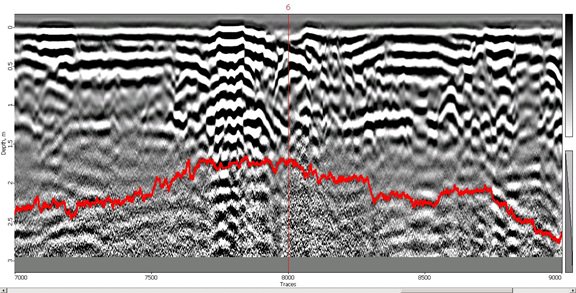 Lowering of penetration depth of signal over local areas 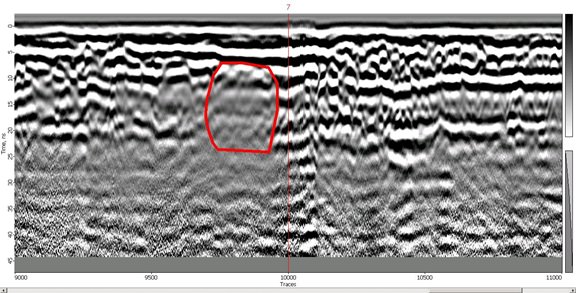 Faded Zones due to water saturation (frequency filtering)
CONCLUSIONS :
There are various modern tools available to map exact location and depth of various pipeline, enabling a faster response in case of a pipeline burst and to facilitate regular monitoring and inspection of pipeline network.
Modern tools also exist to detect leakages from pipelines, and localize such leakages. The techniques enable detection of leakages externally. i.e. without physical access to pipelines, making them suitable for use in city and urban environment as well. Innovative geophysical tools like seismographs and Ground Penetrating Radar for leak detection and localization have been found to be very effective in various cases where convention system failed to work.