Geophysical Investigation for Forensic Applications
Dr. Sanjay Rana, Director, PARSAN
sanjay@parsan.biz
INTRODUCTION
Forensic geophysics is a branch of forensic science and is the study, the search, the localization and the mapping of buried objects or elements beneath the soil or the water, using geophysics tools for legal purposes. There are various geophysical techniques for forensic investigations in which the targets are buried and have different dimensions (from weapons or metallic barrels to human burials and bunkers). Geophysical methods have the potential to aid the search and the recovery of these targets because they can non-destructively and rapidly investigate large areas where a suspect, illegal burial or, in general, a forensic target is hidden in the subsoil. When in the subsurface there is a contrast of physical properties between a target and the material in which it is buried, it is possible to individuate and define precisely the concealing place of the searched target. It is also possible to recognize evidences of human soil occupation or excavation, both recent and older. Forensic geophysics is an evolving technique that is gaining popularity and prestige in law enforcement.
Searched for objects obviously include clandestine graves of murder victims, but also include unmarked burials in graveyards and cemeteries, weapons used in criminal activities and environmental crime i.e. illegally dumping material.
GEOPHYSICS FOR FORENSIC INVESTIGATIONS:
There are various techniques to investigate the subsurface like magnetic, gravity, Ground Penetrating Radar, EM, seismic etc. Geophysical methods are inherently non-destructive and this very nature of geophysics makes it an ideal tool for forensic investigations.
The geophysical techniques available for forensic studies are listed in table below. The table originally has been prepared for Archaeological studies, which applied very well to forensic studies.  Since geophysics basically detects objects that have different physical properties (e.g. density, electrical conductivity, moisture content, etc.) than their surroundings, nearly any feature or artifact that could be recognized in an excavation can be detected by some geophysical technique as long as its size to depth ratio is large enough (i.e. the deeper a target, the larger it must be to be detectable). 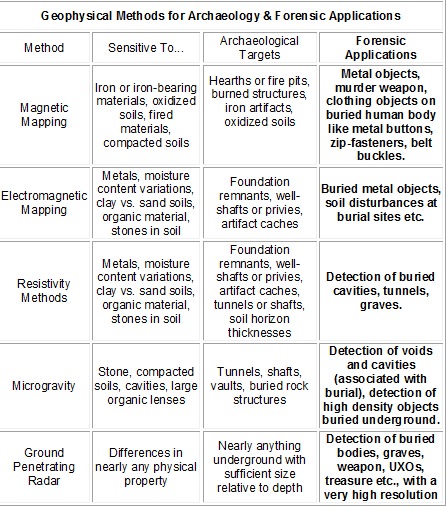 FORENSIC GEOPHYSICS METHODOLOGY
Sub-surface imaging by means of geophysical survey is a powerful tool for forensic investigations which historically has been under-utilized world-over. Continuing improvements in survey equipment performance and automation have made large area surveys with a high data sample density possible. Advances in processing and imaging software have made it possible to detect, display, and interpret anomalies originating from small targets.
Some of the unique advantages of geophysical survey:
� Geophysical methods are non-intrusive, and are not destructive to site integrity
� A survey can provide detailed evidence of occupation and activity not visible from surface information
� Large areas mapped quickly and inexpensively
A survey must be a joint endeavor between the forensic expert and the geophysicist. The suitability of a site for survey, a definition of the target, its physical properties and geophysical contrast as well as survey design must all be determined jointly. Competent interpretation of the forensic geophysical data is clearly a multi-disciplinary activity.
Surveys which are both successful and cost-effective must satisfy a number of basic requirements. They must be implemented using appropriate and properly configured survey equipment. The data sampling strategy and density must be matched to the spatial resolution and statistical requirements of the survey. Monitoring the quality of data while in the field is mandatory, and post survey data processing must be both appropriate and mathematically sound.
The general procedure followed to perform most surveys is to divide the survey area into a series of square or rectangular survey "grids." Each grid is surveyed by taking readings at regular intervals along regularly spaced transect. Ropes marked at regular intervals are used to control transect spacing and position along each transect. Successive transects are surveyed in a zigzag pattern until the grid is completed. The value and position of each data point is automatically recorded in digital format, and is later downloaded to a portable computer. For some large-scale reconnaissance surveys, spatial control may be provided by an integral GPS. Occasionally, these instruments are also used to record selected individual transects or for less formally "scanning" areas of interest
The grid and point density is determined by dimensions of the target being searched. Finding a human body will need a much tighter spacing than the spacing required to final a buried mass burial site.
GEOPHYSICAL METHODS
Ground Penetrating Radar:
Ground penetrating radar is a key tool used by law enforcement and crime scene investigators for locating clandestine burials and buried objects. GPR has been instrumental in locating victims, hidden caches of weapons or evidence, and helping to locate the remains of soldiers and civilians killed in war zones.
The GPR functions by sending high-frequency electromagnetic waves into the ground from a transmitter antenna. Some of these waves are reflected back to the surface as they encounter changes in the dielectric permittivity of the matrix through which they are traveling and are detected by a receiver antenna. The amplitude and two-way travel time of these reflections is recorded on a portable computer. This information is then used to construct a two-dimensional plot of horizontal distance versus travel time. Data collected in the field are stored on a portable computer for later analysis.
Although GPR survey can be performed in a number of ways, the method we generally employ involves dragging the transmitter and receiver antennas together over the ground at a fixed rate, called fixed offset reflection mode. The transmitter emits pulses at regular intervals along a transect which are picked up by the receiver. A laptop computer controls data collection and displays the data as a two dimensional profile. 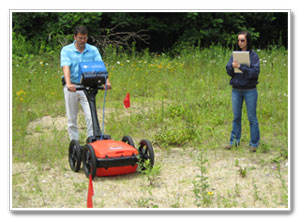 The GPR is able to detect subsurface features whose electrical properties contrast with those of the surrounding soil. The GPR can detect buried features in several ways. It may detect disturbed soil, breaks in the natural stratigraphy or soil profile, or reflections from buried features.
GPR is one of the most commonly used tools for archaeological and forensic investigations, due to its capability to produce high resolution images of the subsurface. Few examples of GPR images are as under: 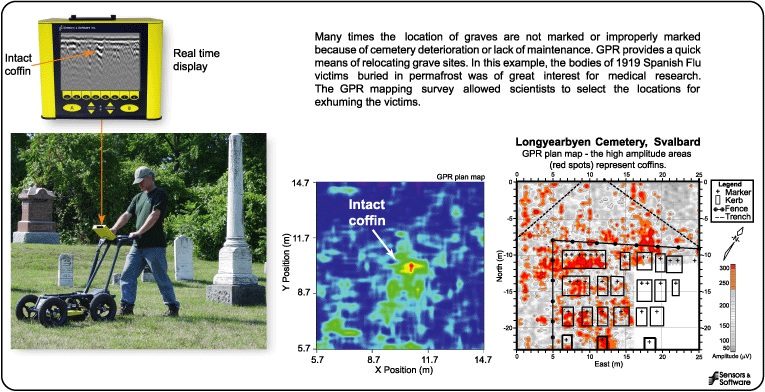 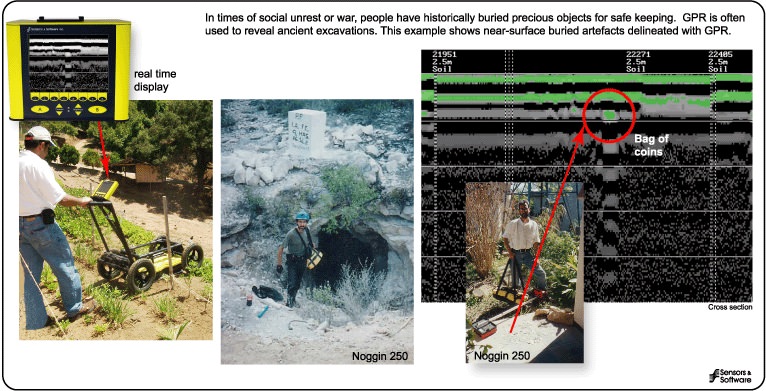 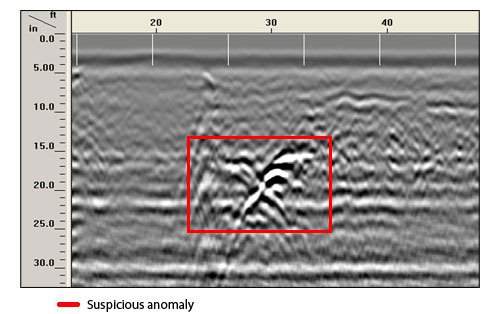 Ground penetrating radar is an invaluable aid to law enforcement in locating disturbed sites and shallow graves that are nearly undetectable when viewed from the surface. 2-dimensional and 3-dimensional images identifying a potential burial site are shown below (example courtesy GSSI): 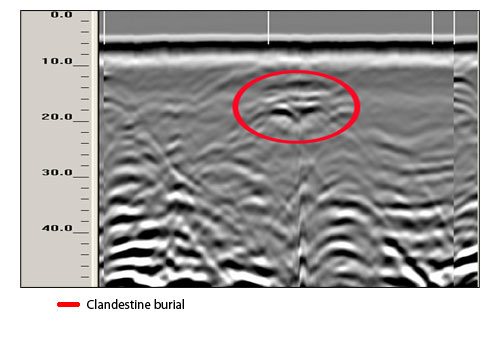 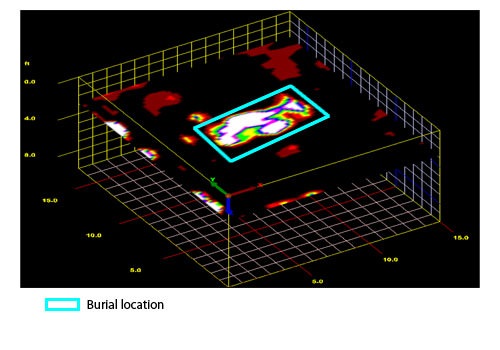 GPR is a strong investigative tool. The common sense approach for an investigating group is to use all of the tools available. Understanding where and when a particular approach is most cost-effective comes from experience.
Magnetic Survey
GPR may not be appropriate in all cases; in clay-rich soils, for example. Other forensic search techniques are currently being tested to quantify their usefulness and usability in forensic searches. One of these is magnetic susceptibility surveys. For example, research studies using magnetic susceptibility surveys over simulated clandestine graves of murder victims are finding promising results; a recent research study (by Pringle et al. 2012) that used a Bartington MS1 magnetic susceptibility system with a 30cm diameter probe observed good target detection rates over simulated graves buried in sand dunes in coastal environments.
For the purpose of this type of survey and in the absence of archaeological and geological contributions, the earth's magnetic field near the surface of the earth is uniform and the gradient of this field is zero. When there is an archaeological or geological magnetic field, it adds to the earth's magnetic field and the magnetic field gradient is no longer zero.
Magnetic field gradient surveys measure this deviation from uniformity and report it as positive data when the deviation is in the direction of the earth's magnetic field and as negative data when the deviation is in the direction opposite the earth's magnetic field. In these surveys, the more "magnetic" the archaeological record the greater the magnetic field distortion and the greater the feature contrast in the survey map.
The example below (courtesy http://www.bartington.com/) shows potential of magnetic method in detecting various forensic targets. 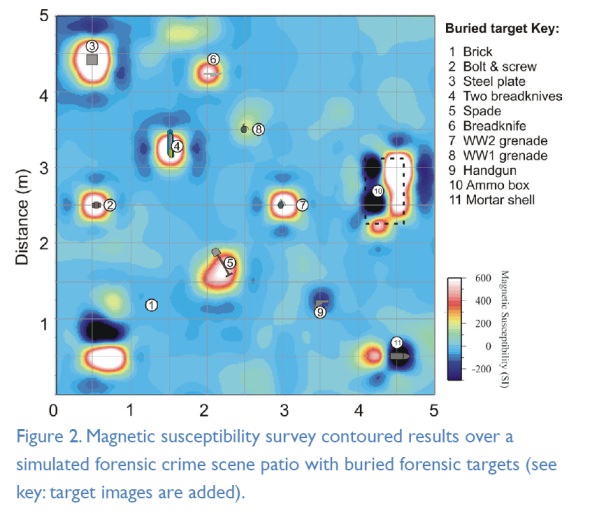 Clearly magnetic susceptibility surveys have great potential in forensic searches for buried targets. This remains an area with plenty of scope for further research.
Resistivity Survey/ Electrical Imaging
Electrical resistance surveys introduce an electrical current into the soil and measure the ease (or difficulty) with which this current flows within the soil. Variance in measured resistance values across a site can be interpreted as variance in the relative resistivity of materials composing the matrix in the vicinity of each reading. Resistance surveys respond to a combination of soil moisture, soluble ion concentration and physical soil type. Moist soils have lower resistivity than dry soils. Fine soils (clay) have lower resistivity than coarse soils (sands or gravels), and high salinity soils have low resistivity.
Example: Electrical resistance survey results from Shields Pueblo. In general, cultural features are associated with high resistance anomalies, shown in orange on this plot of the resistance data. 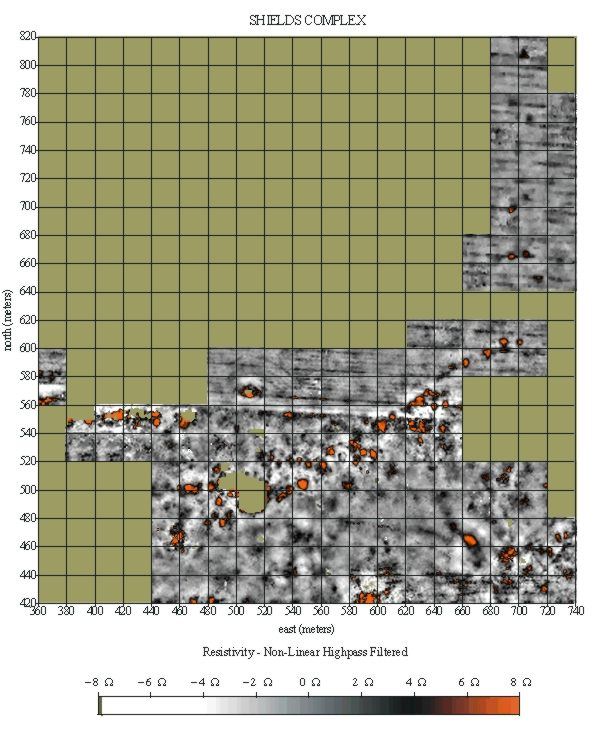 Example:  The Army City site is an historic 19th and early 20th century military site located on Fort Riley in central Kansas. An electrical resistivity survey was conducted over 22 hectares of the site by Archaeo-Physics LLC. The figure shows details of architectural features in a 1.4 hectare subset of the geophysical data. An RM 15 resistance meter was used at a sample density of two readings per square meter and a probe spacing of 0.5 meters. A non-linear high pass filter was used to eliminate resistance variations associated with the geologic "background". Numerous historic features and site patterning are clearly visible. 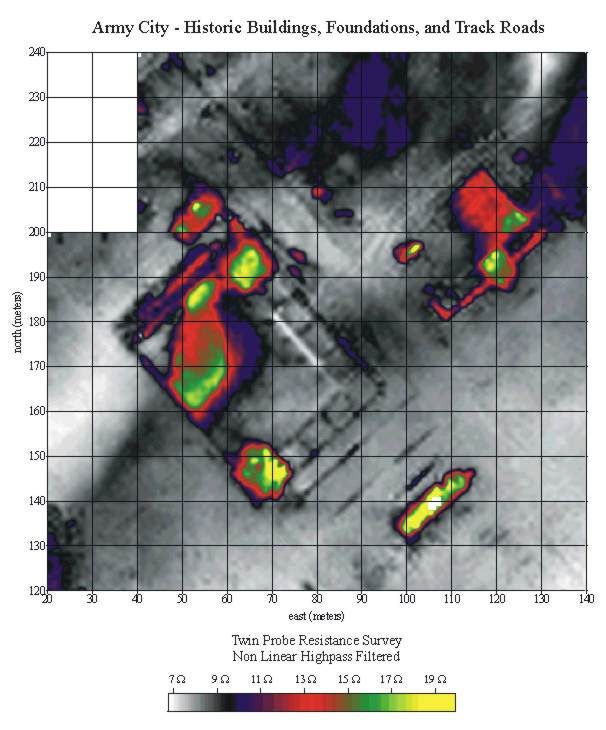 Presented below are various examples obtained from electrical resistivity imaging: 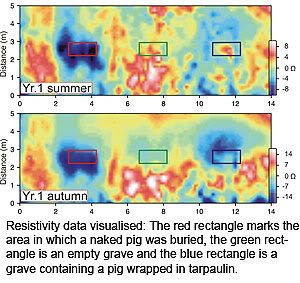 CONCLUSIONS
Geophysical methods can be used effectively by law enforcement and crime scene investigators for locating clandestine burials and buried objects. The tools have been instrumental in locating victims, hidden caches of weapons or evidence, and helping to locate the remains of soldiers and civilians killed in war zones. The techniques are helpful in locating evidence behind brick or concrete walls, wooden floors or in hidden compartments.
Geophysical methods are most successful as part of an integrated and flexible research design. Planning for geophysical survey should be considered from the inception of a project, and the potential information that geophysical data may offer should be anticipated.
REFERENCES:
This document has been prepared to provide a detailed insight to reader on the potential of geophysical methods to investigate sites for forensic applications. Various pictures and case studies have been used from different resources, and acknowledgement has been given wherever possible. The usage is for information dissemination purpose only, and not to claim copyright on any such material, and without any copyright violation.
� Annan A.P. and Cosway S.W. 1998 Ground Penetrating Radar Survey Design. Paper Prepared for the Annual Meeting of SAGEEP. April 26-29, Chicago, Illinois.
� Barker P., Fletcher M., Bradley J. 1998. Reflections on the past: Progress in the application of GPR in Archaeology. Proceedings of the Seventh International Conference on Ground-Penetrating Radar. May 27-30, 1998, Lawrence, Kansas, USA
� Clark, Anthony J. 1996 Seeing Beneath the Soil. Prospecting Methods in Archaeology. B.T. Batsford Ltd., London, United Kingdom
� Conyers, Lawrence B. And Dean Goodman 1997 Ground Penetrating Radar: An Introduction for Archaeologists. Walnut Creek, CA.: Altamira Press.
� Sharma, Prem V. 1997 Environmental and Engineering Geophysics. Cambridge University Press, Cambridge, Unted Kingdom.
� EnviroScan Website
� GSSI Website
� Sensor & Software Website
� Archaeo-Physics LLC Website