Ground Penetration Radar (GPR) has become an advanced and easy to use tool for subsurface investigations in recent past. It uses electromagnetic energy (in MHz region) to detect subsurface objects such as pipes, building foundations, land mines, archaeological artifacts like pottery, etc.

Most common GPR assemblies typically consist of transducer unit, control and display unit and survey cart (Fig.1). The transducer unit comprises of two or more antennas transmitter and receiver. This unit may either be close to the ground surface (ground coupled antenna, Fig.2) or some distance above it (air coupled antenna, Fig.3). Control unit triggers the transmitter unit to emit electromagnetic pulse and at the same time records the signal received by receiver. The display unit shows recorded data in real time. The survey cart has some form of GPS to record alignment of survey line. 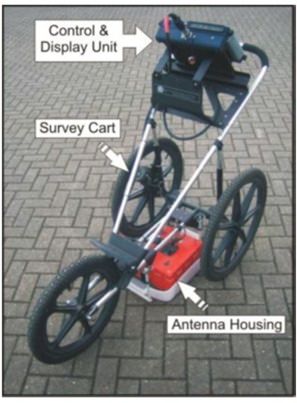 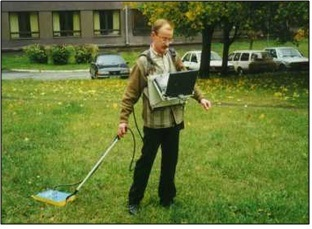 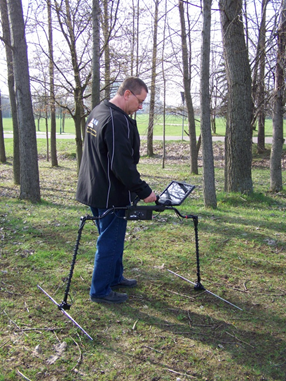 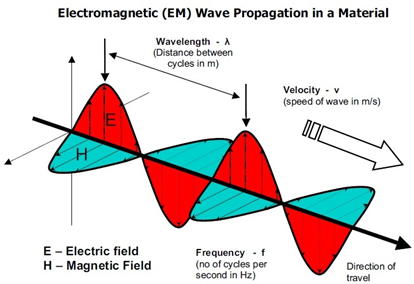 The GPR assembly sends electromagnetic impulse into the ground from a transmitting antenna on or just above the ground. The energy propagates through the material until it encounters change in material properties, i.e. target. The energy then bounces off the target and is received back by the receiving antenna as voltage signal or trace. The trace is then displayed on the screen. This is repeated at regular intervals along the survey line and a subsurface section called as radargram is created.

A typical radargram (Fig.5) has distance along the top and two way travel time along vertical axis. Two-way travel time is the time taken for signal to travel from transmitter to target and back to the receiver. At the time of processing this two way travel time can be interpreted in terms of depth if velocity of GPR signal in the material is known. By studying the radargram, depth and distance of an anomaly in the subsurface can be determined.

The electromagnetic waves sent by GPR antenna travel through the medium with a velocity (generally expressed in m/ns) that is determined by electric and magnetic properties of the material. GPR can only image features which show some contrast in physical properties with respect to medium in which they are embedded.

The ability to image depends on frequency of GPR systems. Wavelength of a signal determines the likely target resolution of the GPR survey. Target resolution is the smallest sized feature that can be easily seen in the GPR section. In general, a target can only be resolved easily if it is bigger or thicker than about to the signal wavelength. Also, adjacent targets can only individually be resolved if separated by about the same distance (often much more). This is commonly referred to as the target discrimination. Higher frequency (lower wavelength) GPRs can detect objects of moderate size and have higher resolution, but have low penetration depths. Lower frequency (higher wavelength) GPRs can detect objects of larger size and have lower resolution, but, high penetration depths.  Therefore, depending on size of object of interest and expected depth of investigation, antenna of appropriate frequency is chosen for GPR survey.

The dielectric properties of material effect propagation and attenuation of GPR signals. The velocity of the material is determined by its electrical and magnetic properties. Mostly magnetic properties do not affect the velocity as much except in case when considerable iron ore is present in soil. Generally, its electrical property called dielectric constant also called as permittivity governs velocity of material. Permittivity (Ɛ) is the ability of material to store and transmit electrical signal. Permittivity of any material is generally given relative to the value of free space i.e. 8.844 x 10 -12 Farads per m (F/m). Relative permittivity values range from: 1 for air, 2-8 dry sand/rock, 4-30 soils, 15-35 saturated sand/rock and 80 for water. The higher the permittivity, the slower the velocity and, therefore, shorter the wavelength.

Water has the highest relative permittivity of common materials. Therefore, water content or saturation is important for working of GPR. GPR works best in dry, sandy environments. It does not work well in clay rich and saline environments due to signal attenuation. It also images features poorly in uneven, made-up ground particularly where scrap metal is present. GPR signals cannot penetrate through metal sheets, pipes or drums. Generally, GPR signals cannot penetrate to a depth of more than few meters to tens of meters in natural materials.

Bathymetry is the survey of underwater floor of ocean, river, lake or any water body. Just as topographical maps provide relief features on the surface of land, bathymetric maps provide information about features on floor of the water body. The survey is usually carried out from a boat navigated on the surface of water along predetermined survey lines (Fig,6). An instrument called Echosounder is used to measure depth of water column below surface level. Echosounder (sonar) is typically mounted beneath or on the side of a boat. It emits a beam of sound into the water which is reflected from the bottom of the water body. The amount of time it takes for the sound beam to travel in the water, bounce off the floor and reach back to sounder, gives estimate of depth of water.

Data from all the bathymetric profiles generated along all survey lines are then used to generate bathymetric plan of entire floor of a water body. This is carried out using various softwares (such as Surfer) which use method of interpolation for estimating elevation in the area between two survey lines. The bathymetric plan is often represented in the form a contour map of the floor (Fig.8). A contour is a line joining points of equal elevation (or depth) in a survey area. The study of such contour maps gives information about topography of floor of a water body. As previously discussed, survey is carried out along predetermined lines. The closer the survey lines from each other, better the accuracy of contour maps generated. 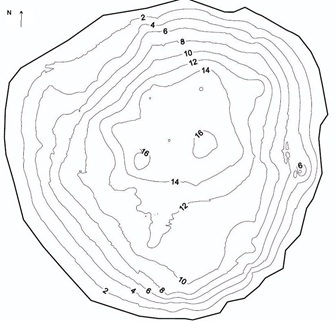 GPR and Bathymetric Survey of a Stilling Basin

Stilling basins are like small lakes/ ponds which are used to dissipate energy of water exiting from spillway of a dam. Their purpose is to prevent scouring that may occur in the floor due to impact of high velocity water flow in downstream reach of a dam. The continuous impact of water may lead to scouring/ erosion of floor over a period of time. Such extensive scouring, if occurred, can pose threat to the structure and may even lead to toppling of the dam. Periodic monitoring of floor of stilling basin is generally carried out to ascertain its health and plan repair measures to be taken, if required. Such monitoring is especially required after rainy season and/or post floods when erosion is higher. GPR and bathymetry serve as useful tools for carrying out such inspection of floor of stilling basin. 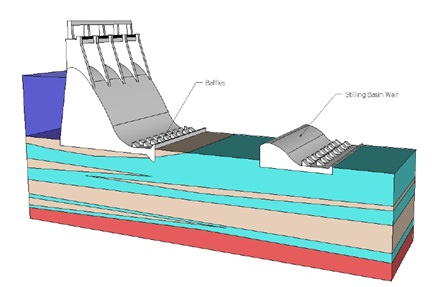 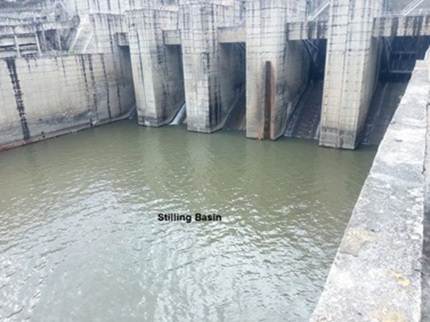 GPR survey may be carried out from a boat on the surface of water in stilling basin. The GPR antenna is put in an inflated rubber boat attached to the main boat, while GPR control unit can be placed in the main boat. The boat is traversed along proposed survey lines. Usually, survey is carried out in a grid, so that it provides complete 2d picture of the floor of stilling basin. The GPS device on board the boat helps in tracking the survey line and maneuvering the boat along designated path. Data from GPR and EchoSounder is collected simultaneously. 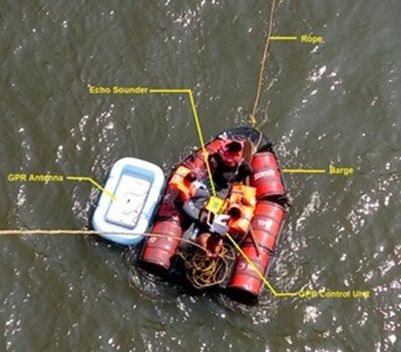 Fig.11: GPR and bathymetric survey being carried out in a stilling basin from a boat that is maneuvered by ropes.

GPR survey produces radargrams along all the survey lines. They provide information about condition of floor. Some examples of radargrams are given below.

The second example indicates a zone where deteriorated concrete floor can be seen easily from difference in thickness of the concrete.

The third example shows a section where a significant portion of concrete floor is damaged and washed off due to water action indicated as eroded zone.

Bathymetric data is obtained from Echosounder along all the survey lines. Based on this data bathymetric profiles are generated along all surveyed lines. They provide information about depth of basin floor only along these survey lines. 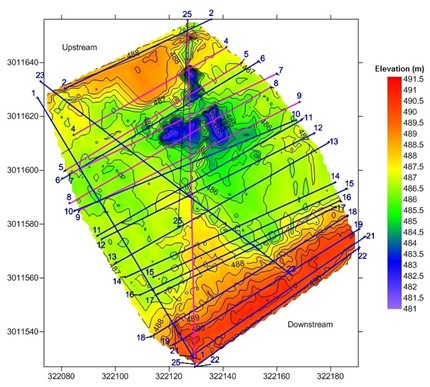